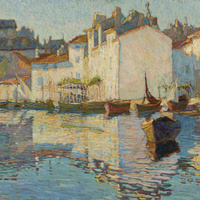 "Across the Atlantic: American Impressionism through the French Lens" Exhibition

This extraordinary exhibition, drawn entirely from the collection of the Reading Public Museum, explores the path to Impressionism through the nineteenth century, and the complex relationship between French Impressionism of the 1870s and 80s, and the American interpretation of the style in the decades that followed. More than seventy-five paintings and works on paper help tell the story of the new style of painting which developed at the end of the nineteenth century—one that emphasized light and atmospheric conditions, rapid or loose brushstrokes, and a focus on brightly colored scenes from everyday life. Some of the artists featured in the exhibition include Edgar Degas, Mary Cassatt, among others, who exhibited in the official Impressionist exhibitions in Paris in the 1870s and 80s. Among the earliest American artists to embrace the style were John Singer Sargent, William Merritt Chase, John Henry Twachtman, Childe Hassam, and Frank W. Benson. Additional American artists embraced the style by the turn of the century, including Daniel Garber, Edward Redfield, Robert Spencer, Arthur Watson Sparks, Robert Lewis Reid, William Paxton, Chauncey Ryder, Frederick John Mulhaupt, and Guy Wiggins, are also highlighted in the exhibition.

Across the Atlantic: American Impressionism through the French Lens is on view at LSU Museum of Art March 8, 2019 through June 9, 2019.

Free admission for students with LSU ID; $5 for general public