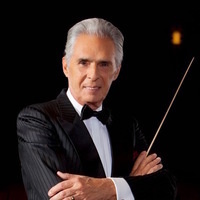 LSU alumnus and Oscar-winning film composer Bill Conti returns to Baton Rouge to conduct the LSU Symphony Orchestra in an exciting concert filled with movie magic. Boasting a 50-year career of film and television scoring, Conti shot to fame in 1976 with his score for Rocky; the soundtrack album went platinum, and the main theme, “Gonna Fly Now,” topped the U.S. charts. After two previous nominations, Conti won an Oscar in 1983 for his work on The Right Stuff.