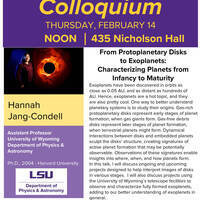 Colloquium - From Protoplanetary Disks to Exoplanets: Characterizing Planets from Infancy to Maturity

'From Protoplanetary Disks to Exoplanets: Characterizing Planets from Infancy to Maturity' with Hannah Jang-Condell, Assistant Professor, Department of Physics & Astronomy, University of Wyoming.

Exoplanets have been discovered in orbits as close as 0.05 AU, and as distant as hundreds of AU. Hence, exoplanets are a hot topic, and they are also pretty cool. One way to better understand planetary systems is to study their origins. Gas-rich protoplanetary disks represent early stages of planet formation, when gas giants form. Gas-free debris disks represent later stages of planet formation, when terrestrial planets might form. Dynamical interactions between disks and embedded planets sculpt the disks' structure, creating signatures of active planet formation that may be potentially observable. Observations of these signatures enable insights into where, when, and how planets form.

This talk will discuss ongoing and upcoming projects designed to help interpret images of disks in various stages. Dr. Jang-Condell will also discuss projects using the University of Wyoming's telescope facilities to observe and characterize fully formed exoplanets, adding to our better understanding of exoplanets in general.