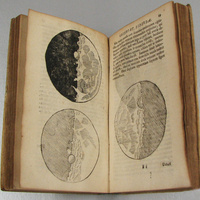 Exhibition - On the Moon: Commemorating the Lunar Landing and the Year 1969 (on Earth) with Rare Books, Literary Works, and Contemporary Collections

The moon has captured our imaginations for millennia: generations have pondered and puzzled over it, measured and illustrated it. This unflagging curiosity through the centuries and across the world drove efforts to reach out and touch the moon on July 20, 1969. In 2019, the 50th anniversary of the first moon landing, LSU Libraries Special Collections launches the exhibition On the Moon exploring the lunar world and its effect on the tides of the human mind.

Collections on display from the library’s holdings include items from the year 1969 that illuminate what was happening on earth when man first walked on the moon. Many items highlight Louisiana and provide a window into the politics, social change, literature and popular culture of the time. Visitors to the exhibition will find the familiar among the historic. Topics such as activism, race relations, changing university policies regarding the student body, local business and industry, hurricanes and federal response, political commentary and war will all resonate with a modern audience.

Important works of science and literature are among the materials on display. Science titles include a 1635 compilation with Galileo’s Sidereus Nuncius (Starry Messenger) featuring engravings based on his early drawings of the moon when first viewed through a telescope; and Pierre-Simon Laplace’s Traité de mécanique céleste (Treatise of Celestial Mechanics, 1798-1825) in which he proposed a dynamic theory of tides. Literary works include Daniel Defoe’s The Consolidator (1705); Edgar Allan Poe’s tale of moon travel by balloon, “The Unparalleled Adventure of One Hans Pfaall” as it first appeared in the Southern Literary Messenger (1835); a 1902 edition of Jules Verne’s important early work of science fiction De la terre à la lune (From the Earth to the Moon); and a 1979 edition of Philip K. Dick’s The Man in the High Castle, the basis for the current television series on Amazon Prime.

The exhibition is free and open to the public. Visit http://www.lib.lsu.edu/special for specific hours of operation.