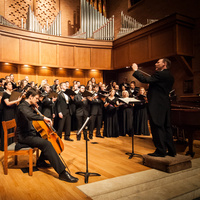 The LSU A Cappella Choir, LSU’s flagship touring choir, has achieved national and international prominence through its performances in many of the most prestigious performance venues in the world. During their seven European tours since 1991, they have been invited to perform high Mass in Notre Dame in Paris and St. Peter’s in the Vatican. They have given invitational performances at the famed Mozarteum in Salzburg, Austria and the Mendelssohn Hochschule in Leipzig, Germany.

The choir’s rich history includes invitational performances for divisional and national audiences of the American Choral Directors Association. In 2016, the Choir gave in invitational performance before the Association of British Choral Directors national conference in Winchester, UK.  They have also performed before the Louisiana Music Educators Association, the American Society of University Composers, the College Music Society, and the American Musicological Society and have received invitations to perform in Russia, South America, Israel, Bulgaria, and Italy. Most recently, they performed as the host choir for the 2017 National Collegiate Choral Organization conference.