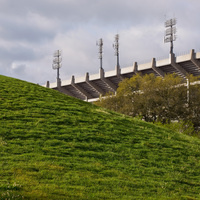 Brooks Ellwood, professor emeritus in the department of geology & geophysics will present his research on the campus mounds.