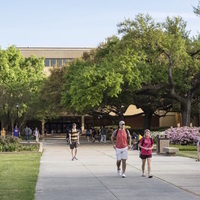 Join the LSU Libraries as we show the classic film, Breathless on the lawn in front of LSU Libraries on September 19th at 7:30 pm.
This film is Not Rated
Running time: 1h27m
*Hosted by LSU Libraries. Special outdoor screening on the new LSU Quad lawn. Open to public.

Petty thug Michel (Jean-Paul Belmondo) considers himself a suave bad guy in the manner of Humphrey Bogart, but panics and impulsively kills a policeman while driving a stolen car. On the lam, he turns to his aspiring journalist girlfriend, Patricia (Jean Seberg), hiding out in her Paris apartment while he tries to pull together enough money to get the pair to Italy. But when Patricia learns that her boyfriend is being investigated for murder, she begins to question her loyalties.