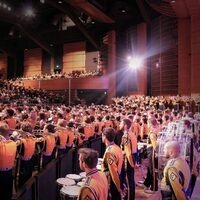 The LSU Department of Bands and the LSU School of Music are proud to present the 38th annual Tigerama: a musical extravaganza for all ages, featuring The Golden Band from Tigerland, LSU Wind Ensemble, LSU Symphonic Winds, Golden Girls and Colorguard.

Tigerama began as a recruiting event over three decades ago by renowned Director of Bands, Frank Wickes. Through his vision and fortitude, the event grew increasingly popular and became a iconic representation of some of the best music LSU has to offer. Proceeds from Tigerama go to support the LSU Marching Band and the Department of Bands in the LSU School of Music. Recently, funds raised through Tigerama, along with the efforts of other gracious donors, enabled the entire Tiger Band to perform in Dublin, Ireland at the St. Patrick's Day Parade.

For 2019, Tigerama will consist of two performances in two special venues!