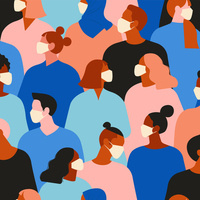 These are challenging and unprecedented times. We are in the midst of a global pandemic. Against this backdrop, the killing of George Floyd brought to the forefront the persistence of racism plaguing our country, which has resulted in a massive public outcry and uprisings around the country. Join us and LSU scholars as they present some of their research pertaining to the current climate on race and the pandemic.

Dr. Roland Mitchell is the E.B. “Ted” Robert Endowed Professor and Dean of the College of Human Sciences & Education at LSU. His research theorizes the impact of historical and communal knowledge on postsecondary education. He has authored seven books and numerous scholarly works that have appeared in leading educational journals. He serves as the director of the Louisiana Summit on African American Male Educational Success, and for his ongoing service at meeting the needs of underrepresented populations in education, he has been awarded the David A. Kahn Award for Exemplary Service, by the Baton Rouge Youth Coalition. He has a deep passion for impactful community service as evidenced through his membership on the advisory boards of the Louisiana Department of Children and Family Services, Campus Federal Credit Union, and the Louisiana Governor’s Taskforce on Community Policing and Reform.

Dr. Lori Latrice Martin is a professor in the African & African American Studies program and the Department of Sociology. She is also the Chair of the College of Humanities and Social Sciences Diversity Committee and LSU Faculty Athletics Council. She is the author of many scholarly works. Her most recent publications include Black Women as Leaders, Big Box Schools, White Sports Black Sports, and South Baton Rouge. She has a forthcoming book with Brill called Introduction to Africana Demography and a forthcoming book called America in Denial with the State University of New York Press

Dr. David Stamps is an assistant professor in strategic communication and mass media and holds the current Joe D. Smith Hibernia Professorship at the LSU Manship School of Mass Communication. His research is aimed at understanding the psychological and behavioral effects of identity-focused interpersonal interactions, individuals’ exposure to, and engagement with media. Inherent in this work is a recognition that issues of class, gender, race, geographic location, and sexuality meaningfully impact these relationships. His research appears in several published books including, Films as Rhetorical Texts: Cultivating Discussion about Race, Racism and Race Relations, and in multiple peer-reviewed journals. He is a former entertainment publicist and grant writer.

This LSU Science Café will be held entirely online via Zoom. The Zoom link to attend will be shared to those who register in advance.